An Israeli veterinarian has discovered a Bronze Age Egyptian artifact engraved with hieroglyphs on the seafloor off the Israeli coast.

Rafi Bahalul is a 55 years old veterinarian and artist from the village of Ein Hod, who one morning last year was taking his constitutional morning swim along Israel’s northern shores just off Atlit, a town near Haifa, when he spotted hieroglyphs in the sandy seabed, which turned out to be a 3,400-year-old carved Egyptian stone anchor.

The vet called the Israel Antiquities Authority to examine his find and Jacob Sharvit, head of the IAA’s maritime archaeology unit, told Haaaretz “sometimes the sea does our job for us.” A team of underwater archaeologists recovered the stone last January, and it is now on display until October 12 at the Israel Museum in Jerusalem as part of the ‘ Emoglyphs’ exhibition.

Royal Origins Of The Sunken Hieroglyphs

This Egyptian artifact is thought to have been created between the 15th and 12th centuries BC, according to Shirly Ben-Dor Evian, curator of Egyptian archaeology at the museum. Shaped like a trapezoid with rounded corners and a hole drilled near the top end to secure a rope, this type of anchor was used by ships during the Bronze Age, which ended some 3,200 years ago. According to the curator, the “amount and quality” of the decorations is what makes it unique among other anchors.

Sharvit explains the stone anchor likely originated as a decorative relief located in a temple shrine or royal precinct somewhere in Egypt, and it had been subsequently reused as an anchor. A conclusion reached after a series of chisel marks were identified as having separated it from its original limestone block, and other marks show how the inscription was executed and how the block had finally been shaped into an anchor.

Ben-Dor Evian explained that stones were reused in Egypt, and this anchor’s initial purpose is indicated by two carved female hands of the goddess Seshat – the deity of writing. Worshiped as the “Mistress of the House of Books” she is often depicted on the walls of major shrines recording aspects of pharaoh’s rules, military campaigns or shown commanding the measurements for the foundations of temples, monuments and tombs. In this case, Ben-Dor Evian explains that the carving is incomplete, but he thinks it may have had something to do with the “recording of war loot.”

It is believed the Seshat inscription might have originally decorated one of the many royal temples across Egypt and that it had been either renovated, abandoned or destroyed allowing for the reuse of the raw material. However, what the archaeologist finds “even more interesting” is that the face of Seshat has been chiseled away. One possible explanation for this is that political or religious upheaval led a new pharaoh to erase the memory and religious artworks of a rival predecessors. 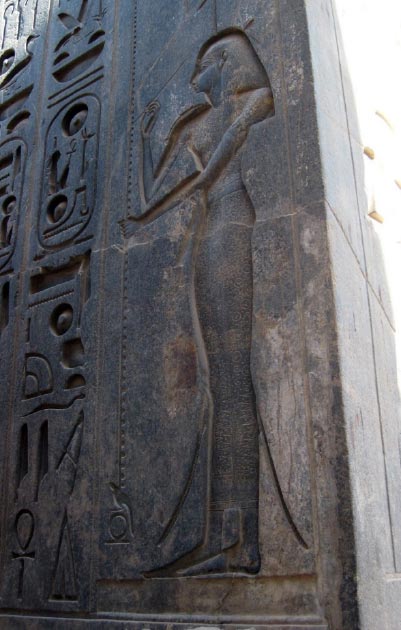 However, it is also being considered that she had been erased as an act of respect for the deity. In particular, when you reuse a sacred object for a secular purpose you first have to make it non-sacred, in the same way that according to the Londonist, Christians deconsecrate churches before they are reused for non-religious purposes.

Only The Tip Of An Iceberg

Regarding the origins of the ship that the anchor had once held stable at sea; it must have belonged to some Egyptian trader who was under the direct control of the pharaohs, for the ship owner must have had “access to the stones of whatever sacred precinct this relief was taken from.” It is also thought that rather than having dropped an anchor, the entire ship had been lost because of the presence of “other ancient finds at the site,” and Sharvit says, his research unit is still combing the area, looking for other remains from the possible shipwreck.