Submerged stone structures lying just below the waters off Yonaguni Jima are actually the ruins of a Japanese Atlantis—an ancient city sunk by an earthquake about 2,000 years ago. That’s the belief of Masaaki Kimura, a marine geologist at the University of the Ryukyus in Japan who has been diving at the site to measure and map its formations for more than 15 years. Each time he returns to the dive boat, Kimura said, he is more convinced than ever that below him rest the remains of a 5,000-year-old city.

“The largest structure looks like a complicated, monolithic, stepped pyramid that rises from a depth of 25 meters [82 feet],” said Kimura, who presented his latest theories about the site at a scientific conference in June. But like other stories of sunken cities, Kimura’s claims have attracted controversy.

“I’m not convinced that any of the major features or structures are manmade steps or terraces, but that they’re all-natural,” said Robert Schoch, a professor of science and mathematics at Boston University who has dived at the site. 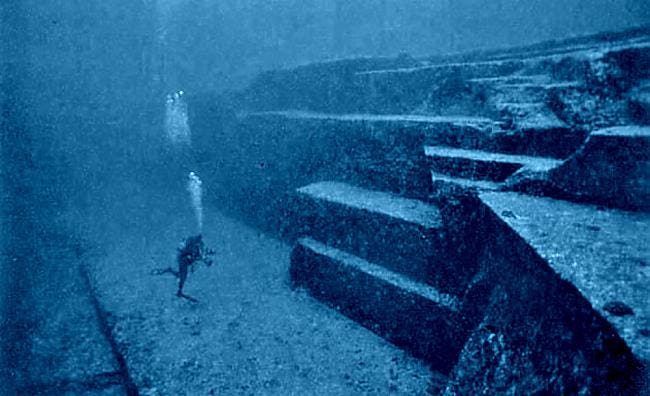 “It’s basic geology and classic stratigraphy for sandstones, which tend to break along planes and give you these very straight edges, particularly in an area with lots of faults and tectonic activity.”

And neither the Japanese government’s Agency for Cultural Affairs nor the government of Okinawa Prefecture recognize the remains off Yonaguni as important cultural property, said agency spokesperson Emiko Ishida. Neither of the government groups has carried out research or preservation work on the sites, she added, instead of leaving any such efforts to professors and other interested individuals.

Yonaguni Jima is an island that lies near the southern tip of Japan’s Ryukyu archipelago, about 75 miles (120 kilometres) off the eastern coast of Taiwan (see map). A local diver first noticed the Yonaguni formations in 1986, after which a promontory on the island was unofficially renamed Iseki Hanto or Ruins Point.

The district of Yonaguni officially owns the formations, and tourists and researchers can freely dive at the site. Some experts believe that the structures could be all that’s left of Mu, a fabled Pacific civilization rumoured to have vanished beneath the waves. On hearing about the find, Kimura said, his initial impression was that the formations could be natural. But he changed his mind after his first dive.

“I think it’s very difficult to explain away their origin as being purely natural, because of the vast amount of evidence of man’s influence on the structures,” he said. 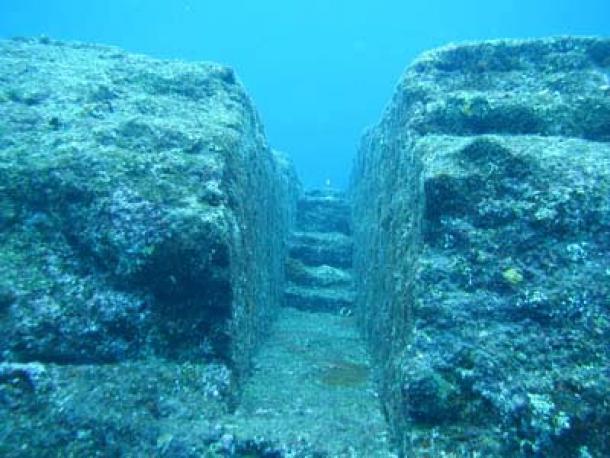 As teams of expert divers fanned out from the south coast of Okinawa using grid-search patterns, they found five sub surface archaeological sites near three offshore islands. The locations vary at depths from 100 to only 20 feet.

For example, Kimura said, he has identified quarry marks in the stone, rudimentary characters etched onto carved faces, and rocks sculpted into the likenesses of animals.

“The characters and animal monuments in the water, which I have been able to partially recover in my laboratory, suggest the culture comes from the Asian continent,” he said.

“One example I have described as an underwater sphinx resembles a Chinese or ancient Okinawan king.” Whoever created the city, most of it apparently sank in one of the huge seismic events that this part of the Pacific Rim is famous for, Kimura said.

The world’s largest recorded tsunami struck Yonaguni Jima in April 1771 with an estimated height of more than 131 feet (40 meters), he noted, so such a fate might also have befallen the ancient civilization. Kimura said he has identified ten structures off Yonaguni and a further five related structures off the main island of Okinawa. In total, the ruins cover an area spanning 984 feet by 492 feet (300 meters by 150 meters).

The structures include the ruins of a castle, a triumphal arch, five temples, and at least one large stadium, all of which are connected by roads and water channels and are partly shielded by what could be huge retaining walls. Kimura believes the ruins date back to at least 5,000 years, based on the dates of stalactites found inside underwater caves that he says sank with the city.

And structures similar to the ruins sitting on the nearby coast have yielded charcoal dated to 1,600 years ago—a possible indication of ancient human inhabitants, Kimura added. But more direct evidence of human involvement with the site has been harder to come by.

“Pottery and wood do not last on the bottom of the ocean, but we are interested in further research on a relief at the site that is apparently painted and resembles a cow,” Kimura said.

“We want to determine the makeup of the paint. I would also like to carry out subsurface research.”

Toru Ouchi, an associate professor of seismology at Kobe University, supports Kimura’s hypothesis. Ouchi said that he has never seen tectonic activity having such an effect on a landscape either above or below the water.

“I’ve dived there as well and touched the pyramid,” he said. “What Professor Kimura says is not exaggerated at all. It’s easy to tell that those relics were not caused by earthquakes.”

Boston University‘s Schoch, meanwhile, is just as certain that the Yonaguni formations are natural. He suggests that holes in the rock, which Kimura believes were used to support posts, were merely created by underwater eddies scouring at depressions. Lines of smaller holes were formed by marine creatures exploiting a seam in the rock, he said.

“The first time I dived there, I knew it was not artificial,” Schoch said. “It’s not as regular as many people claim, and the right angles and symmetry don’t add up in many places.”

He emphasizes that he is not accusing anyone of deliberately falsifying evidence. But many of the photos tend to give a perfect view of the site, making the lines look as regular as possible, he said. 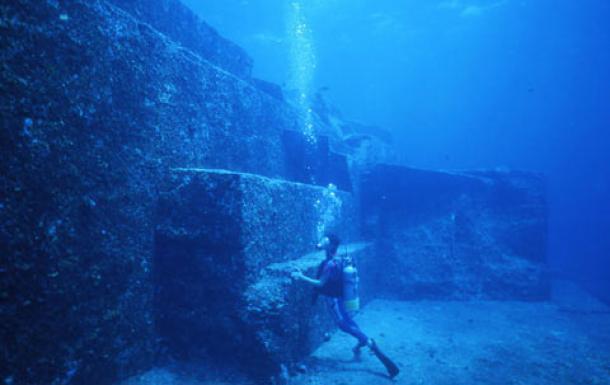 Schoch also says he has seen what Kimura believes to be renderings of animals and human faces at the site. “Professor Kimura says he has seen some kind of writing or images, but they are just scratched on a rock that is natural,” he said.

“He interprets them as being manmade, but I don’t know where he’s coming from.”

But Kimura is undeterred by critics, adding that the new governor of Okinawa Prefecture and officials from the United Nations Educational, Scientific, and Cultural Organization have recently expressed interest in verifying the site. 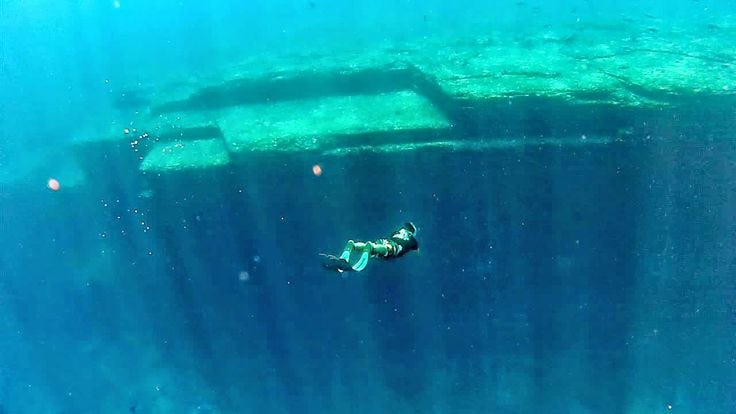 “The best way to get a definitive answer about their origins is to keep going back and collecting more evidence,” he continued.

“If I’d not had a chance to see these structures for myself, I might be skeptical as well.”