In June 2011, a Finnish treasure hunting company was scanning the Baltic Sea in the Gulf of Bothnia when “they claimed” their sonar captured what tabloid newspapers reported was “a sunken UFO.” While most scientists agree that the 2011 Baltic Sea discovery is most likely a natural geological formation , another mystery craft has just been identified by a team of divers in the Baltic Sea. The divers who discovered the “mystery shipwreck” said the “near-perfect” ship they found on the Baltic Sea floor in 2020 was “miraculous.”

Now, that mysterious Baltic Sea ship that was discovered between the mainland of Finland and the Estonian island of Hiiumaa has been identified. The Badewanne dive team that found the Baltic Sea wreck consists of voluntary divers of different nationalities. The team specializes in documenting wrecks in the Gulf of Finland. Another team of archaeologists and maritime historians solved the ship’s identity, and the answers are amazing. 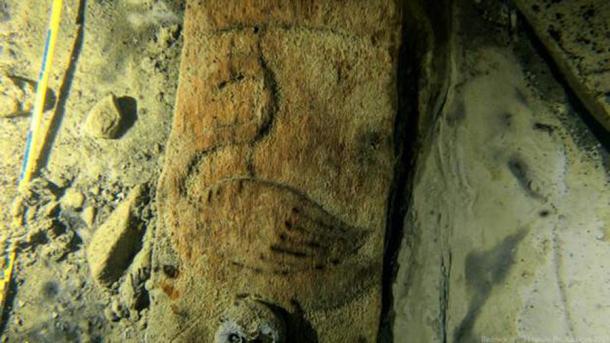 A bird motif on the Baltic Sea ship, which was initially discovered on the seafloor off the coast of southern Finland in July 2020, and then intensively researched by various experts. ( Handle Productions )

The Baltic Sea Ship Mystery Solved By Its Ancient Motifs

Discovered in great condition at a depth of 85 meters (279 feet) in the Baltic Sea last summer, the Dutch “fluyt” ship was engineered to “carry maximum cargo with minimum crew,” according to a report in Dutch News . The identity of the ship remained unknown until a team of deep-sea archaeological divers discovered “carved motifs on the transom.”

Archaeologist Niklas Eriksson of Stockholm University, who led the team of divers that solved the mystery of the 400-year-old sunken ship , said the archaeologists are now celebrating a “miraculous breakthrough.”

An article on Diver Net quotes Minna Koivikko, from the Finnish Heritage Agency, who said the discovery “restores one’s faith in miracles.” Koivikko revealed to the media that the ship was named “Swan.”

Furthermore, it is known the craft was built in 1636 AD, and the archaeologists believe that closer examinations of the transom will reveal the coat of arms for the ship’s home port. Archaeologist Martijn Manders, from the Cultural Heritage Agency of the Netherlands, said the new information found on the ship might even yield the names of the crew members. 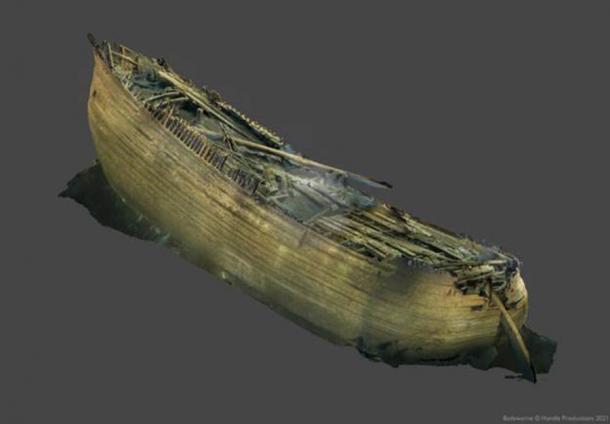 A 3D photogrammetric model of the fluyt Baltic Sea ship as it was found on the Baltic Sea floor. Orthometric projection model made with Metashape software. ( Handle Productions )

Professor Eriksson said that while divers have found fragments of motifs on previous dives, now archaeologists “have the entire composition.” And with the newly discovered motifs the team of researchers can now identify the ship in the same way that people in the 17th century did, according to Dutch News, who also said this specific design of seaborne craft “helped forge the Dutch Empire.”

The “fluyt” was a three-masted vessel with a capacious hull, so designed to maximize her cargo capacity. It also had specially designed rigging so that smaller crews could hoist and maintain the sails, and this rig structure also enabled more space, and therefore cut operational costs. Manders said the fluyt highlighted “the typical Dutch approach to ship building and symbolized the flourishing seafaring trade of the time.” 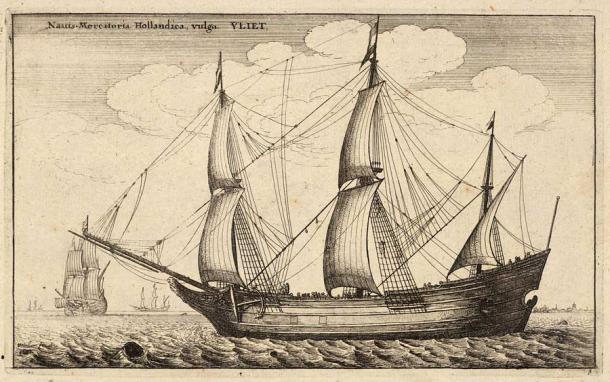 Fluyts: Kings Among The Fleets Of Early Globalization

The discovery of this ship will add volumes to what is known about how fluyts operated. Moreover, it will almost complete archaeologists’ picture of an ancient transportation vessel that was “a simple, common ship, that created the right circumstances for early globalization ,” according to professor Niklas Eriksson.

Putting the discovery into historic context, when the ship was afloat and serving the Dutch Empire , it added to what was a global powerhouse. In the mid-17th century Dutch ships carried around half of all of Europe’s produce and goods. The ship was functional in a period of European history that is known as “The Dutch Golden Age ” and that nation’s maritime power lasted until the late 17th century.

Manders told Dutch News that the team of researchers invited amateur sleuths who are interested in maritime history to join in the search for more clues. The heritage specialist explained that new research archives have become available in digital form online, and that this whole investigation “is an interesting puzzle, just the thing for a bad summer.”

The story of the divers who discovered the ship, and the archaeological team who researched and interpreted the motifs, is currently being made into a new documentary by Handle Productions of Helsinki, Finland, which Ancient Origins will no doubt discuss after it’s aired.

Top image: The once-mysterious Baltic Sea ship as it was first discovered by a volunteer dive team in July 2020 off the coast of Finland. The ship has now been identified as a Dutch three-masted fluyt, based on expert research by a diverse time of archaeology experts. Source: Badewanne team / Handle Productions