Archaeological authorities in Egypt have just announced the discovery of many new Egyptian mummies and precious statues . In all, at least 59 new coffins and mummies were found at one of Egypt’s most important archaeological sites: the renowned UNESCO World Heritage Site at Saqqara, a vast necropolis on a plateau just south of the modern city of Cairo. CGTN reports that “The Saqqara plateau is part of the necropolis of Egypt’s ancient city of Memphis.” Memphis was the royal capital of Egypt for several dynasties. Saqqara is home to several pyramids including the Step Pyramid (or the Pyramid of Djoser). NBC reports that there are “burials here from the 1st Dynasty (2920 B.C.-2770 BC) and the Coptic period (395-642 AD).” Finding so many new Egyptian mummies at a single location will provide archaeologists with a lot more information about this period and the area where the discoveries were made.

Egyptian archaeologists have been working in this particular area of Saqqara since 2018 and have previously made some important finds, including the tomb of a priest. Recently, the experts found three shafts or wells and it was here that they found many new Egyptian mummies in their sarcophagi. In total, 59 ornate sarcophagi have been found, so far. NBC quotes a Egyptian Ministry of Tourism and Antiquities statement that the coffins were found “entombed near the famed Step Pyramid of Djoser in Saqqara.” 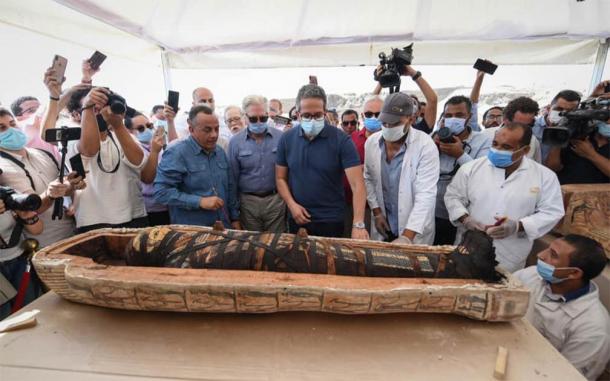 A closeup of one of the new Egyptian mummies, perfectly preserved, found recently at Saqqara, south of Cairo. ( Ministry of Tourism and Antiquities )

Unlike so many other burials sites across Egypt, the new site had not been looted and the coffins were all in excellent condition. Mostafa al-Waziri, secretary-general of Egypt’s Supreme Council of Antiquities is quoted by the Citizen as saying that “the coffins were laid in ‘perfect condition’ due to a protective seal that preserved them from chemical reactions.” This meant that the coffins, which are made of wood, were protected from the elements, and this ensured their survival. Mostafa Waziri informed NBC “that the find reminded him of the tomb of King Tutankhamun because both had been discovered almost intact.”

New Mummies Were Made For 26 th Dynasty Priests And Clerks

It is estimated that the wooden sarcophagi are 2600 years old. The Citizen quotes Mostafa al-Waziri as saying that “They belonged to priests and clerks from the 26th dynasty .” This was the last native dynasty to rule Egypt and it witnessed the last flourishing of traditional Egyptian culture and art. Those interred in the wooden sarcophagi would have been members of the elite in Memphis and elsewhere.

According to CGTN one coffin “containing the pristine mummy of an ancient priest” was found. All of the ornate coffins are decorated with hieroglyphs, which had been painted on the wood. Much of the original decoration and painting miraculously survived. All of the sarcophagi and their mummies are expected to be carefully studied. 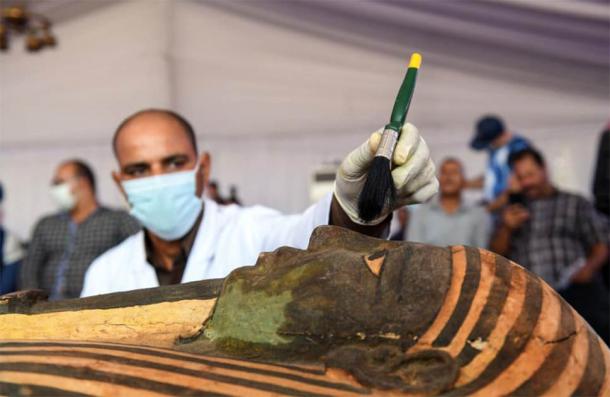 The painted wooden exterior, in excellent condition, of one of the many new Egyptian mummies discovered recently at Saqqara, Egypt. ( Ministry of Tourism and Antiquities )

Statues Of The God Seker and Nefertam Also Found

A number of other artifacts were found in the shafts. Reuters reports that other significant finds included “28 statues of the ancient Egyptian God Seker, one of the most important funerary deities.” Seker (or Sokar) was worshipped in Upper Egypt and was the patron god of all those who worked on tombs or in the mummification process. 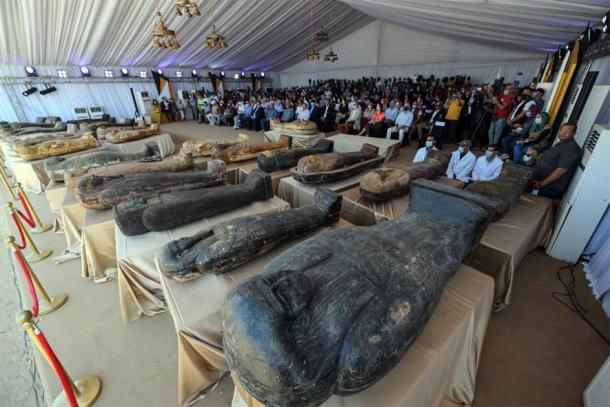 At a major national press conference, announcing the new Saqqara finds. ( Ministry of Tourism and Antiquities )

A precious bronze statue of the deity Nefertam was also found with the wooden coffins in the shaft. This god was often associated with good fortune. The statue was inlaid with semi-precious stones such as agate. It is about 12 inches (35 cm) high and according to NBC “its base is inscribed with the name of the owner of the statue, a priest called ‘Badi Amun’.”

Other Discoveries Expected From This New Location

CGTN quotes a statement by the Egyptian Ministry for Tourism and Antiquities as saying that the “Saqqara antiquities area is still revealing its secrets.” It is believed that behind a sealed door in one of the shafts there could be several other burials. Therefore, it is likely that more important discoveries will be made by the archaeological team focused on this site in the future.

All the newly discovered coffins and mummies will be put on display at the soon-to-be-opened Grand Egyptian Museum on the Giza Plateau. The opening of the Grand Egyptian Museum, probably the largest archaeological museum in the world, has been delayed several times, but is planned to open sometime in 2021.

Top image: A few of the perfectly preserved new Egyptian mummies and coffins recently found in the Saqqara area, south of Cairo. Source: Ministry of Tourism and Antiquities