“The impact probably came from behind.”

A violent encounter with a rival dinosaur may explain why Big John, the most massive Triceratops skeleton ever found, has a keyhole-shaped opening on its frill, a new study finds.

This fight happened more than 66 million years ago, but scientists think they know the assailant’s identity: It was likely another Triceratops, according to the study, published online Thursday (April 7) in the journal Scientific Reports(opens in new tab).

“The location, shape and size of the lesion suggest that it was caused by the horn of another Triceratops of similar size,” study lead researcher Ruggero D’Anastasio, a professor of biological anthropology at G. d’Annunzio University of Chieti-Pescara in Italy, told Live Science in an email.

As the name indicates, Big John was a big dinosaur: It measured about 26 feet (8 meters) long, and its skull was about 6.6 feet (2 m) wide. The skeleton, discovered in the Hell Creek Formation in South Dakota in 2014, is about 60% complete. These enormous features helped Big John make headlines last year when its fossilized remains sold for about $7.2 million (6.6 million euros(opens in new tab)) at an auction house in Paris.

Before the auction, Big John was taken to Italy, where study co-researcher Flavio Bacchia, of the fossil restoration company Zoic, prepared the specimen. Bacchia noticed the hole on the right side of Big John’s frill, which prompted him to reach out to scientists at Italian universities who could help analyze the lesion.

The “traumatic injury,” about 7.9 inches (20 centimeters) long and 2 inches (5 cm) wide, is longer than a person’s hand, D’Anastasio said. And it likely wasn’t made by a head-on attack. 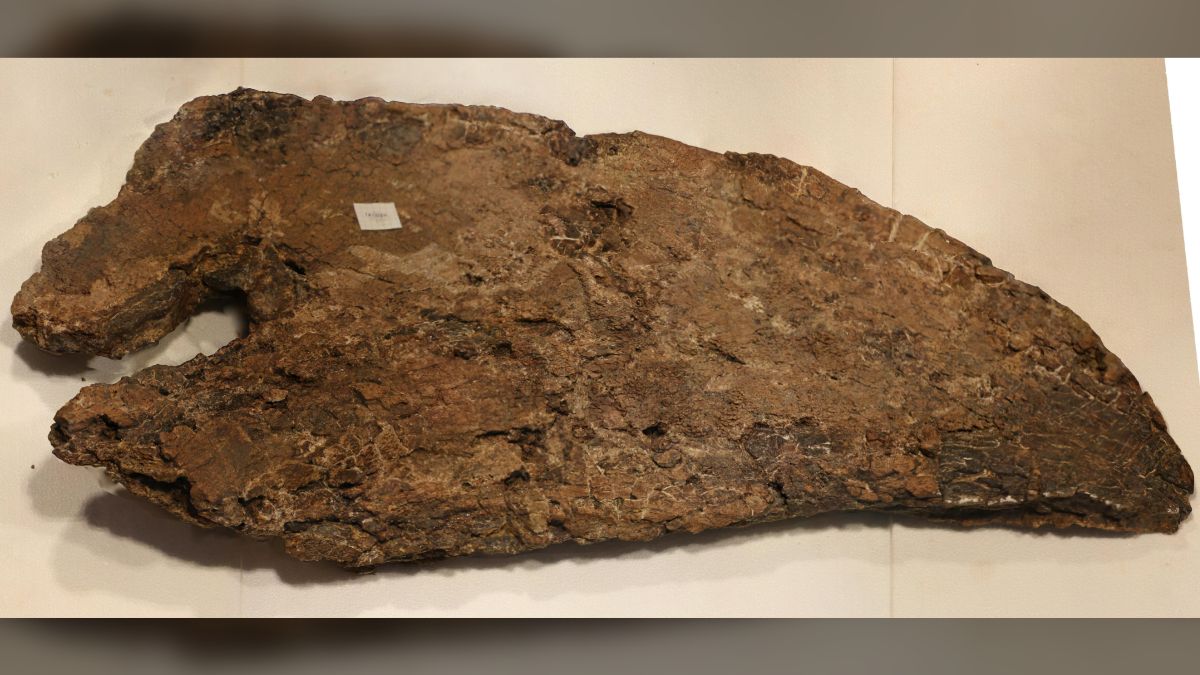 “The impact probably came from behind, as suggested by the location of the lesion itself and the shape of the ‘exit hole,’ which resembles the bullet holes described in forensic cases,” D’Anastasio said. The team tested this idea in the laboratory, simulating the impact with a cast of a Triceratops horn, “and the result confirms the hypotheses based on the size and shape of the lesion,” he said.

The wound, however, didn’t kill Big John, at least not right away. “Big John survived the trauma,” D’Anastasio said. “There are clear signs of bone healing, although the Triceratops died before healing was complete.”

An analysis of the bone remodeling at the lesion, compared with healing rates of traumatic injuries observed in modern reptiles, suggests that Big John got gored at least six months before dropping dead. “Perhaps the animal died after a few months from an infection following the trauma, but this is only a hypothesis to be demonstrated,” he noted. Big John is hardly the only horned dinosaur to have a hole in its skull. Scientists have long thought these holes were the remnants of wounds made by other horned dinosaurs, said Spencer Lucas, curator of paleontology at the New Mexico Museum of Natural History and Science in Albuquerque, who was not involved in the study. But this study is the first to actually investigate this claim, he said.

“It’s a good study,” Lucas told Live Science. “I think it’s very convincing.” However, it’s not a slam dunk: The perpetrator could have been another horned dinosaur, like Torosaurus, which lived alongside Triceratops, Lucas said.

“There’s really no way to know for sure, unless you find part of the horn sticking out of the wound or something like that, which is not likely,” Lucas said. The finding also fits with the idea that Triceratops lived in social groups, “something like a herd,” Lucas added. In modern animals that face off against their own species, “a lot of times these types of combat or battles are basically to establish dominance or to establish territory,” Lucas said. So, perhaps Triceratops individuals living at the end of the Cretaceous period (145 million to 66 million years ago) were doing the same thing.

“That’s the real significance of the study,” Lucas said. “It’s giving us an insight into the behavior of at least this particular individual.”

However, Lucas did have a bone to pick with Big John, or at least its owner: Only a small sample of Big John’s lesion is available to researchers at G. D’Annunzio University, according to D’Anastasio. D’Anastasio was told by Zoic and the gallery that handled the auction that the buyer — whose identity is not known publicly — will soon make Big John’s skeleton available for scientific study. But that’s not the same as a museum or public institution owning a specimen, Lucas said. Individuals who privately own specimens can make these fossils available (or unavailable) to researchers at any time, meaning that scientists might not always have access to them.

“All published fossils should be available for scientific study,” Lucas said. “One wonders whether that will be the case with this fossil (apparently in private hands) in 10, 20 or 50 years.”