Eastern Macedonia’s most important archaeological site, Philippi (also written as Fillipi), has had a huge role to play in shaping the history of the Western world. The UNESCO World Heritage Site, named after Philip II, the father of Alexander the Great, has yielded the remnants of a 2,000-year-old statue depicting the legendary hero, Hercules. Hercules (called Heracles in the Roman pantheon) was a Greco-Roman figure seen as a champion and protector of the weak and poor, with superhuman strength.

The impressive statue adorned a building which, according to the excavation findings, dates to the 8th or 9th century AD. (Copyright YPPOA Hellenic Ministry of Culture)

The statue of Hercules, dated to the 2nd century AD, may have once adorned the late Byzantine period building from the 8th or 9th century, amongst which ruins it was located. Statues and figures from the classical and Roman periods adorned buildings and public spaces into the latter stages of the Byzantine period. Public spaces and cities were decorated and spruced up accordingly at this time.

Despite Philippi’s storied history, this discovery ranks right up there as one of the site’s most significant yields. A remarkable 2,000 years old, this huge statue was discovered by a team from Aristotle National University. The group was led by Professor Natalia Poulou, Assistant Professor Anastasios Tantsis, and Professor Emeritus Aristotle Menzo, along with a team of 28 students, Aristotle University at Philippi reported. 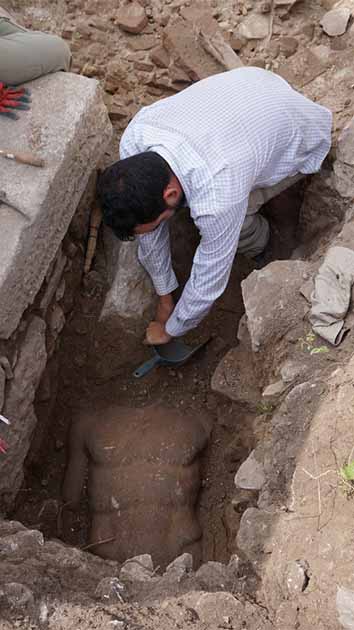 The Hercules statue in Philippi was uncovered by a team from Aristotle University in Philippi. This is the moment a Greek archaeologist unearthed the impressive statue of Hercules. ( YPPOA Hellenic Ministry of Culture )

When intact, this larger-than-life Hercules statue was designed in such a manner that it could hold and accommodate his various traditional signifiers. These include a wreath, a lion skin, and a club; all depicted on the Hercules statue. A club has been found in fragments, and a lion skin hangs from his extended hand. Hercules’ wreath of vine leaves was held together by a ribbon in the back, the remnants of which rest on his shoulders.

The Hellenic Ministry of Culture and Sports stated that excavations continue on the eastern side of the now-defunct city’s main streets. This street incidentally intersects with another main street that continues north. The point of convergence is formed by a widening square, dominated by a richly decorated Byzantine era building, and a fountain, Heritage Daily reported. Fragments of the building have been uncovered over the last three decades.

The finds are part of the extensive excavation.( YPPOA Hellenic Ministry of Culture )

When Philippi was named as a UNESCO World Heritage Site in 2016, it marked just over a century since excavations had first begun in the city in 1914. Unfortunately, the First World War would delay this process, and it was only in 1920 that excavations began in earnest. By the time of the Second World War, a Greek theater, forum, baths, and city walls had already been uncovered. After the Second World War, Greek archaeologists returned to the site and excavated a fair number of public buildings. 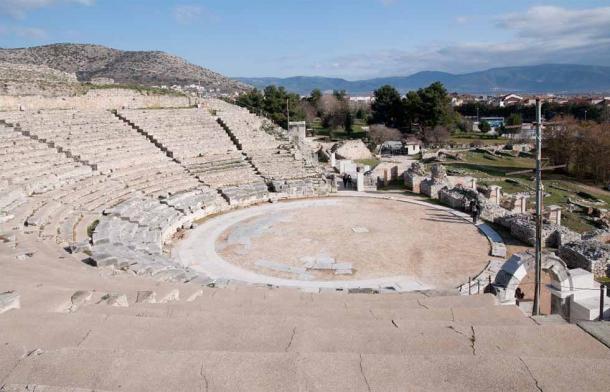 The ancient theater of Philippi, in modern Greece, was excavated between the First and Second World Wars (MrPanyGoff / CC BY SA 3.0 )

This major Greek city lies north of the city of Kavala in modern-day northern Greece, and was established as a Greek colony by Philip II , father of Alexander the Great , in 356 BC. It remained inhabited for many centuries, but was finally abandoned in the 14th century AD after the Ottoman conquest . This observation has been recorded by French traveler Pierre Belon, who described scenes of ruin, and the Turks using the city as a stone quarry . 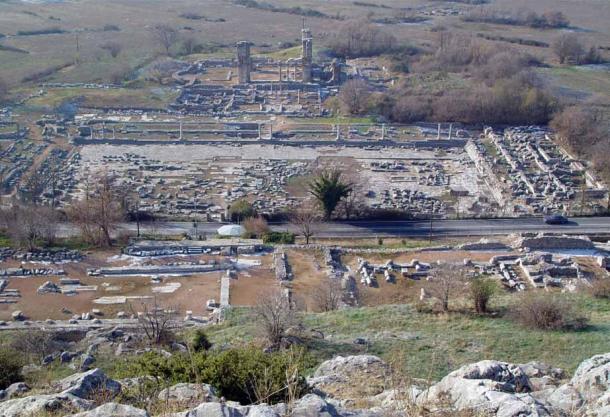 After Philippi was abandoned in the 14th century, the Turks used the city as a stone quarry. Excavations continue to learn more about the city’s Byzantine past. (Marsyas / CC BY SA 3.0 )

Due to Philippi’s location at the head of the Aegean Sea, it transformed into an important center for gold mining for the Macedonian Kingdom, and the Romans who came later. Its integration into the Roman Empire also helped facilitate the spread of Christianity, Inside Hook reported. The arrival of Apostle Paul to Philippi changed the city’s trajectory forever, and the first Christian church on European territory was established in 50 AD.

In the early Christian period, between the 4th and 6th century AD, several landmarks were built on the sites of Roman buildings and private houses, including the Octagon Church of Saint Paul complex, a metropolitan cathedral dedicated to the Apostle Paul, the so-called Bishop’s Castle, and three grand Christian basilicas. Incidentally, abandonment began in stages from the 7th century onwards, due to a series of large earthquakes, and the Slavic raids.

With clearly much more to be uncovered at a site oozing this much history, archaeologists plan to continue excavations on the eastern side of the city until the end of the year. They expect further discoveries and finds, which will add to the rich tapestry of Philippi’s history.

Top image: This impressive larger-than-life Hercules statue has been excavated in the ancient city of Philippi, in modern Greece. Source: YPPOA Hellenic Ministry of Culture